5 Things You Never Knew About Dogs 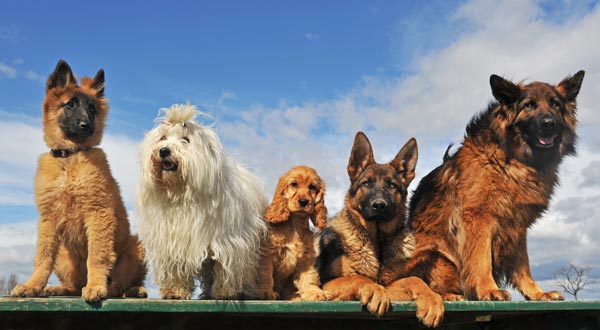 The great thing about being the guardian of a dog is that however long you’ve had them, they’ll always find a new way to surprise you. As much as we think we know about them, we’re still learning each and every day. Sometimes it can be the smallest thing such as learning a new trick, other times it can be a show of emotion that makes us realise just how deep their minds reach. So without further ado, here are 5 facts that you probably never knew about man’s best friend….

We’re not talking about the sort of complex jealousy that us humans can feel from time-to-time. No, we’re talking a more simple, straightforward sort of jealousy. In 2008, scientists published a study in the respected journal Proceedings of the National Academy of Sciences and found that when two dogs were asked to do the same trick and only one was rewarded for it, the dog that was left unrewarded became agitated, began scratching itself and avoided the gaze of the dog that was rewarded. This behaviour was repeated across a number of breeds and dogs and was seen as a clear sign of jealousy.

Dogs can see in colour

Did you think that dogs could only see in black and white? It’s a common misconception and one that we now know to be false. Scientists from the Russian Academy of Sciences’ Laboratory of Sensory Processing have now proved that dogs can see in colour, albeit in a limited range and can use this to distinguish between objects of different colours. Our human eyes have three cones that detect colour, whilst dogs only have two cones. They see in blues and yellows but not reds or greens. It’s the same colour spectrum as seen by people who have colour blindness.

Dogs can be trained to detect Prostate Cancer

The NHS reported this year that research by scientists at the Humanitas Clinical and Research Centre in Italy had found that highly trained sniffer dogs are capable detecting cancer. They, with the help of dog specialist dog trainers managed to train dogs to differentiate between urine samples of men who don’t have prostate cancer and those that do. It may be unlikely that dogs would ever be utilised in such a way in large numbers, but if researchers can identify the chemical that they are detecting, they may be able to develop other ways to identify the early stages of Prostate Cancer.

Thunderstorms can be painful

Have you noticed how some dogs hate thunderstorms? The large claps of thunder and heavy rain may just frighten some, but there is growing evidence that thunderstorms have particular sound frequencies that can actually be painful to dogs. Cowering in a corner as the storm begins may simply be a reaction to pain.