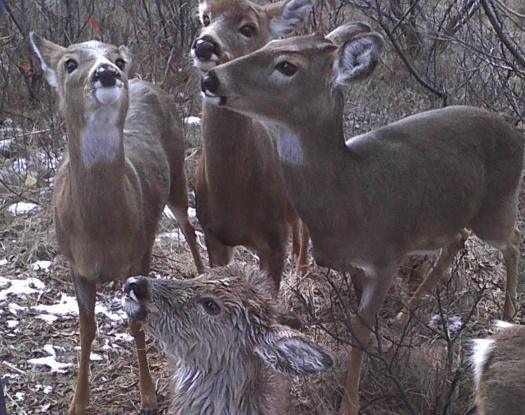 Rescued by police and brought back to life by the family

This is a heartwarming story from 2013 but I’ve only just come across it. It’s so nice I wanted to share it with you in the hope it will bring a smile to your face. And yes, it involves a baby deer 🙂

It all began when a team of Suffolk County cops (USA) were patrolling in Fire Island when they saw a small baby deer’s head sticking out from the icy waters. They moved their boat alongside and pulled the deer from the frozen waters, thinking it was dead. Lt. Raymond Epp, of the Suffolk County Police Marine Bureau said they didn’t know how long it had been in the icy waters but it remained freezing wet and motionless, despite covering it in blankets.

“It wasn’t flailing or kicking, it was just sitting there,” Epp said. “We weren’t sure if it was in shock of hypothermia.”

Sometimes we just need our friends

As they looked on, expecting the baby deer to be too far gone, a magical thing happened…

Three deer appeared out of the nearby woods and came up to the baby deer. They began licking it and were probably from the same family, having been keeping a watchful eye on things from a distance. And then it happened – the baby deer began to show signs of life, first opening it’s big brown eyes and then gently standing up and moving around the dock. 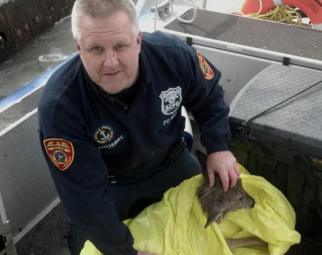 Bringing the baby deer back to shore

The officers were amazed, but knew the animal needed some food and warmth so they took it to the nearest station house and fed it warm popcorn (it was the only food they had!). After a while the faun began to show full signs of life and ran back into the woods with its family.

“I couldn’t wait to go home and tell my daughter about it,” said Epp, who has an 11 year old. “It was just such a nice, heartwarming story.”

Isn’t it lovely to hear an animal story with a happy ending? If the police officers hadn’t found the deer he would surely have died in those icy waters. Sometimes I wish I could just tune into my surroundings and be alerted if an animal was in trouble. I can’t stand the thought of any creature needing help and not getting it. Maybe one day… 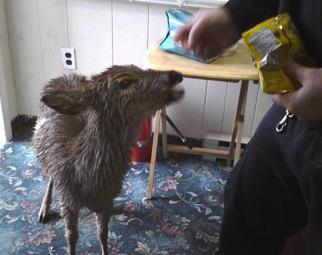 Popcorn will do the trick!