An Inside View of Animal Shelter Reiki

As an animal therapist I have seen first-hand how effective reiki healing can be for them. After all, animals are made of pretty much the same stuff as us humans and we all know how reiki can bring about a positive outcome for people. Being a bit of a reiki junkie I like to read up on all things related and came across reiki practitioners working in animal shelters and had one of those lightbulb moments! Of course, reiki would be ideal for those stressed out, fearful animals who are in shelter, waiting for their forever homes.

I then came across a wonderful lady called Lucy Lofting via Facebook of all places. Lucy is a retired HR director but did a degree in Zoology and Masters in psychology. She now works as a volunteer at her local Dogs Trust as a reiki practitioner and also teaches Reiki For Rescue Dogs workshops. She also works with the Healing Trust to advise on healing animals. With her wealth of knowledge and experience I thought an interview was in order, so we got planning and here is the result. It’s packed full of useful information and stories of how reiki has helped heal rescue dogs, so dig in and enjoy an inside view of animal shelters from a reiki practitioner’s perspective.


An interview with Lucy Lofting 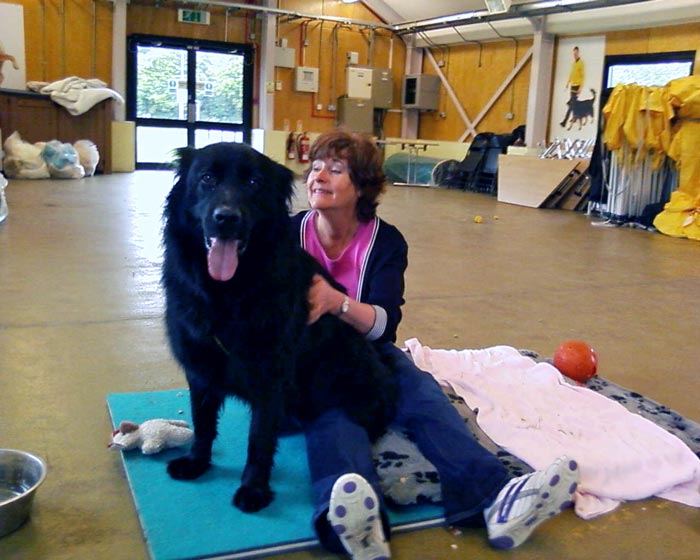 Frankie enjoying a reiki session at the shelter

How did you become an animal reiki therapist and what made you focus on shelter dogs?

I’d been a Healer and Reiki Master working for many years with cancer patients at all stages of the cancer journey but particularly ‘walking the last mile’ with them. Changes in my lifestyle meant I wanted to move away from death to more vibrant life, I needed more exercise and as I regularly drove past the London rehoming centre of Dogs Trust near my home. I thought ‘what if…’

Did the staff understand what reiki was and accept you straight away?

The Head Office Chief Vet whom I approached did, as he knew the impact of Tellington Touch.  Once he knew I was a trained, insured professional and had worked and run a Reiki study in a leading cancer hospital, he was very open to a trial. He introduced me to the behavioural team at the local centre and gave me a few tips on my safety with non-domestic dogs – as he rightly surmised I would be meeting some canines of a very different nature from our family dogs.

I think it took time for the staff to cope with energy work as a concept, although some already practised various therapies themselves. I offered to do a staff talk after 3 months and that helped to explain what I did with ‘their dogs’ behind closed doors. I always invited staff into a session if they were interested and in time the improvements in the dogs became recognised, even by staff who weren’t that positive about energy therapies.  The centre manager is now immensely supportive to my work there and having the top people behind you makes a big difference.

Tell us what an average visit to the shelter involves for you. 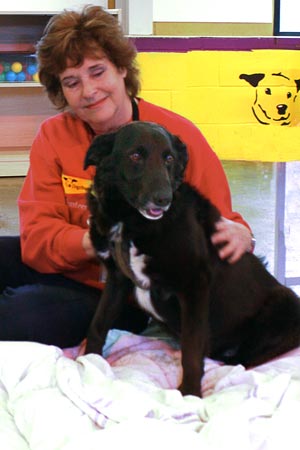 I usually review the dog profiles online each week and prepare a list of possible dogs, which I discuss with management on arrival. Some are regulars who may not be available that week for various reasons, so I take suggested replacements. Then I set up the vast training barn (which I have for 2½ hours) with a mat, towel, toy, water bowl and stool.  I expect to see six dogs in a session and collect and return each from the main Reception in another building. As I walk the dogs across, I try to connect with them and tell them we are going to do something really nice. We have about 15 minutes on the mat and I often include a bit of play time as I remove muzzles and leads on entry.

The dogs don’t get much off lead time, so chasing a ball and having a sniff around to catch up on ‘doggy news’ is important time out. We often take pix on a mobile phone, as recorded animal postures say a lot about how beneficial Reiki is, particularly with dogs who rarely lie down or relax around people. I review those afterwards for signals that I may feel, but may not be able to see, when behind the dog. Our management are experts at reading canine body language, so it’s a key part of feedback.

After the session I wash the pee off the floor and take the bedding to the laundry, before sitting in with Betsy a very traumatised, long stay dog, whom I play with every week to help keep her socialised. I have known her for years and we are friends.  She was kept locked in a shed and is agoraphobic and very frightened of most humans, beyond her immediate carers. When I get home I write a report and add my spreadsheet records of each ‘treatment’ and mail it to the centre manager with pictures. As I handle the dogs comprehensively, I often pick up things which I think need vet referral and I request that in my report giving details eg location of lumps, rashes, small abrasions or pain signals in teeth or ears.

I will spend about 5 hours in total each week in preparation, hands-on therapy, report writing and discussions with staff about the dogs.  I go every week (bar holidays) as continuity is important.

What was unexpected and opened your awareness?

I think the biggest surprise was how much breeding bitches can suffer emotionally over the removal of their puppies, cesarean deliveries and still births. This was discovered when a very troubled bitch showed me that it comforted her for me to have my hand on her abdomen area where her puppies would have suckled – it was the one pleasant association she had. The Reiki helps them express their grief and move on. They can be very resentful to a whole category of humans (eg male vets) as a result of what has happened to them, particularly if the pups were still born or put to sleep. This is then recorded as behavioural issues, which makes them harder to rehome. However, dogs are very forgiving and once the grief is out, they move on far better than we humans do.

Also exposure to the breeds I have become very accustomed to in care, like ex-racing greyhounds, endless Staffies (some gang-land dogs) and the giant dogs who outgrow their homes. None of whom I had had much contact with before.

What success stories really stand out for you personally?

An abused scrap metal yard guard dog called Mavis, whom only a couple of staff could get near, started to attract my attention when looking online for my next dog to work with.  I had only seen her once before and recall the area had to be cleared of people for her to be brought through. The manager thought it was unlikely I could work with her, but suggested a meeting at a distance. When she was walked out to meet me, to everyone’s surprise she was completely calm, walked over and stood quietly. She was quite unused to human touch, was surprised but allowed me to drop my hand onto her back and decided it felt OK. She clearly wanted to have Reiki and I think she called me to help her, not the other way around.

Word got around the centre within the hour that we had had this extraordinary meeting which nobody had thought possible. When I saw how she usually reacted to strangers (some poor woman who got out of her car 150 yds away in the car park) I was quite shocked by the level of aggression – she was a large mastiff and terrifying screaming and rearing on her chain at the stranger. We worked together for 5 weeks, unmuzzled and always with a minder present for my safety, before I became concerned for her health and was picking up waves of pain from her tummy when visiting her in kennels. She had an aggressive and fast growing abdominal tumour which because of her handling issues had not been diagnosed. Under sedation the vet managed to examine her, found the tumour which was now fluid filled and football sized and Mavis had to be pts immediately. However, I knew I had helped her and she helped my work and reputation by accepting me. 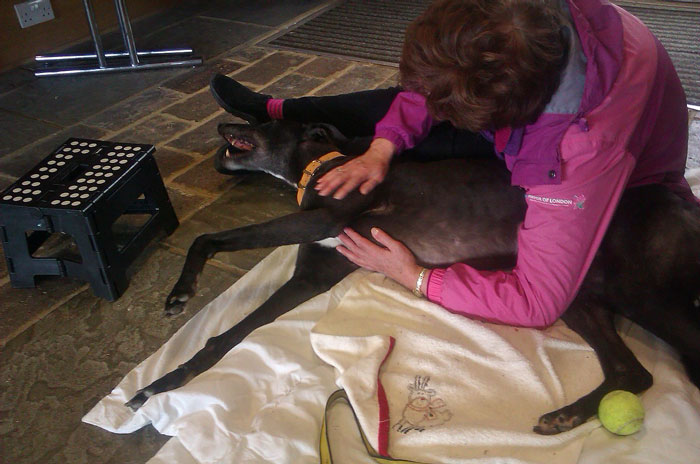 Bobby flat out during a reiki treatment with Lucy

Did you train with any reiki teacher or organisation specifically for animal reiki?

Yes I have trained with all the ‘greats’ over recent years. Initially, I did my cross training with the original Animal Healer, Margrit Coates.  Then as I developed as an animal healer myself I studied with Liz Whiter founder of the Animal Healing Organisation. Then having read Reiki for Dogs -which helped me and shed new light on how to work -with Californian Kathleen Prasad.  I contacted her and we corresponded. I started wondering how I could attend her training courses and I booked up immediately when she said she was coming to Europe for a 3-day equine course in Essex the following year. Each works differently and each has taught me so much.

I think my style is very blended now but all are totally animal-centric.  As I work with nearly 300 dogs a year, each is an individual needing something slightly different and of course as I work with both dogs (carnivores) and horses (herbivores), recognise there are massive pack and herd behavioural differences, which affect the way you approach an animal.

For anyone thinking of offering reiki in their local shelter, what words of advice can you give them about starting out and ensuring they work safely with dogs?

As a dog lover and seasoned healer, I thought I was well prepared to work with rescue dogs, but I couldn’t have been more wrong. The dogs have taught me so much and six years on, are still teaching me. Their emotional intelligence and understanding of humans (good and bad) is far greater than we recognise. My particular interest is in the hormonal changes Reiki Healing generates and how that helps them at so many levels, particularly in creating trust for the first time, even in the somewhat artificial setting for a hunting pack animal, of confinement 22 hours a day in a shelter kennel.

Many thanks to Lucy for giving the time out of her busy schedule for this interview and allowing us a glimpse into how reiki can work in animal shelter life. If you have any questions for Lucy you can comment below, or follow Lucy’s animal reiki healing page on Facebook at www.facebook.com/ReikiAnimalHealing