Communicating with Mishka the Horse 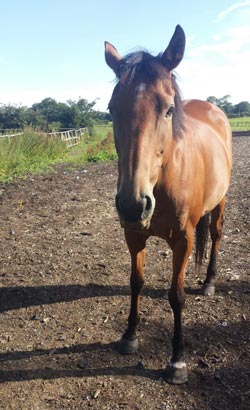 Right now I am still practicing my animal communication readings so I offer them for free. I’m still working here in the UK with a 9 – 5 job so any communications are done in my spare time – of which I have very little with two small children running around the house!  Doing pet readings for free is a great way to practice whilst helping pet owners and their animals out at the same time. I often ask for a quick testimonial for the site and I just had to share this one in a blog post rather than on the testimonials page itself.

A lovely lady called Amanda contacted me a few weeks ago asking if I could connect with her horse called Mishka. She gave me a few questions to ask so I found a quiet spot when the kids had gone to bed and gave it a whirl. Once I had found that peaceful spot within I had a wonderful experience of a white light. I had my eyes closed but it seemed as if someone had turned the lights on in the room. I then felt what seemed like waves of warm energy flowing towards me. Only subtle, but they were there and it felt wonderful. That was a sure fire sign I had made a connection to Mishka. After spending around half an hour with her I came away with what felt like very clear messages that I put down in an email and sent to Amanda. The next day Amanda replied, saying how it all made sense and how happy she was.

She mentioned she was having trouble clipping Mishka and was going to try in a few days so I made another brief contact with Mishka to let her know that it was ok and Amanda was only trying to do it for her benefit. It seems from this lovely testimonial that Amanda sent me that it worked!

I contacted Jason at Talking to Animals as I was concerned that my 9 year old ex-racer mare, Mishka, was unhappy. I simply sent Jason a photograph of her and asked him the questions to which I wanted answers to. I was extremely happy when Jason responded to my request. I was also worried that the response was not as I was hoping i.e. my mare was unhappy. I did not give anything away about my mare to Jason when I contacted him. He didn’t even know she was an ex race horse.

I was relieved to see that when Jason responded he told me that my mare was happy where she is and that she did love me. This made me feel like I had acomplished something with her as I was worried she didn’t enjoy my company as she wasn’t very affectionate.

He also mentioned that she had a bad experience in the past, unfortunately, I have tried to find out information about her past to clarify this to no avail but she does have a scar on the right of her bum which I think may have been caused by her being mistreated previously as she is a very nervous horse.

Jason also mentioned about her running really fast, as said earlier, Jason did not know Mishka was an ex racehorse and I think that it is fantastic that he was able to establish this information.

Jason also told me that my mare wanted more of what was in my pockets, this made me laugh as I always have treats in my pockets, I don’t meant to spoil her but I just can help it as I love her dearly.

Before contacting Jason I felt my mare was still a little nervous of me and generally nervous of many things, I felt that she wasn’t affectionate and felt that she didn’t enjoy my company. Since Jason has contacted me I feel that Mishka is much more loving, we have cuddles and she looks at me with her kind eyes. Its lovely to arrive at the yard in the morning and hear her whinnying to me.

I also managed to clip her after hearing from Jason, before, she was extremely frightened, she was a little nervous at first but soon calmed down and realised I wasn’t going to hurt her, I was even able to take the leadrope off so she was standing without being tied up and she was fine.

All in all, after Jason had spoken to Mishka it feels as though she is a lot more trusting of me and seems much more loving. I would recommend my horsey friends to contact him if they are seeking answers or guidance for their worries or troubles.

Thanks again to Amanda for such a detailed testimonial. There are people who don’t believe in animal communication but it’s this kind of feedback which helps prove it is real. I had to laugh when Amanda confirmed the treats she carries in her pockets – I remember in the reading a picture flashing up in my mind showing Mishka nuzzling her coat pocket and her saying she wanted more of what was in there! It was also interesting she showed me an image of her running really fast, almost flat out. At the time I didn’t know she was an ex-race horse but it explains it perfectly now.

I’m also relieved she is showing signs of being less nervous. One thing animal communicators can do is reassure animals that their human friends love them and will never harm them, especially if they have been mistreated in the past. It can take a while to get over traumatic experiences and us humans don’t always convey our feelings well enough for animals to understand. Through telepathy we can bridge that gap. Hopefully Amanda and Mishka will now have a more relaxed and happy life together.